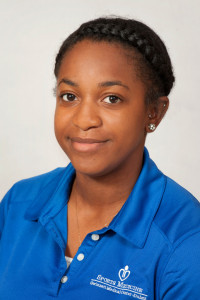 Originally from the U.S. Virgin Islands, Janae earned her Bachelor of Science degree in athletic training from Marywood University in 2014. While attending school, she worked with Division III, high school and junior college level athletics.

Amber earned her Bachelor of Science degree in Athletic Training from Georgia Southern University in 2016. During her schooling, she worked with two local high schools as well as the Georgia Southern football, softball, baseball and men’s soccer programs.

After graduation, Amber attended Georgia State University where she received her Master’s in Art of Teaching degree in Health and Physical Education. While there, Amber worked as a graduate assistant athletic trainer at the Westminster Schools of Atlanta where she covered middle school and high school athletics.