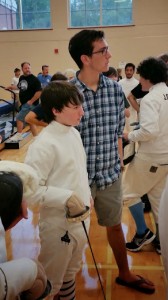 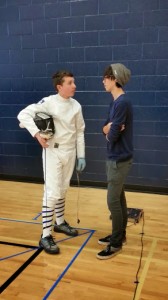 The Centennial Fencing Team competed Saturday in a special tournament for novice fencers at Cambridge HS.  The Knights faced other programs in the Georgia High School Fencing League, a league comprised of 14 schools in the greater Atlanta area.

The Knights novice women were represented by sophomore Karla Chavez and freshmen Olivia and Simone Katz.   Olivia Katz nearly cracked the top ten finishers, while Chavez and Simone Katz scored impressive wins in their preliminary round.

The Knights men’s team was led by freshmen Daniel Sandfelder and Joseph Dorfman.   Both placed in the top 20 in a 53 fencer field.  Sandfelder led all fencers after the preliminary rounds and pulled out a thrilling 15-14 victory in his first direct elimination (DE) bout before falling in a nail biter in the following round.  Other first time freshmen competitors included Dean Bowler, Roman Cheek, and Chason Thompson.  All fenced well in the preliminary rounds but were eliminated in their first direct elimination (DE) bouts.

The Knights are coached by Fencing Master Gene Gettler.  Coach Gettler was extremely pleased with the performance of his novice fencers, as some entered the tournament with less than a month of experience.

CHS fencers next compete at  Dunwoody High School this Saturday, September 27.  The team is still accepting newcomers.  Fencing is an exciting sport, come give it a try!  The team practices Mondays and Wednesdays after school.